A beautiful and mesmerizing composition created for the Kol Nidre by erhu player Patty Chan. The combination of erhu and viola da gamba has such expressive vocal quality that appropriately captured the spirit of compassion, forgiveness, and peace. Through the gentle dialogue of two ethnically diverse instruments, one can hear the voices of God and human exchanging in an intimate and affectionate manner. A moving work with exquisite erhu solo, a special contribution to the Kol Nidre.

THE PATH TO PATTY CHAN’S

Once we had recorded Roger Scannura’s Kol Nidre – Todos Los Votos (The Flamenco Kol Nidre) – the question arose as to who would be commissioned to compose the next version of the Kol Nidre for the Kol Nidre Project, and what instrument or instruments would they play.

The pattern had been established: The Kol Nidre Project was created to permit seasoned musicians to re-interpret the Kol Nidre through their own musical traditions and instruments.

Thus far, Nicolas Jolliet (Nico) had used his love of the sitar and Indian rhythms to create his version – Kol Nidre Goes East – which ends with a Reggae beat.

Roger’s Kol Nidre involved a journey by Flamenco guitar back to the time of the expulsion of the Jews from Spain in the 15th century, and his astonishing discovery that he may have descended from ‘Conversos’ – who hid their Jewishness beneath a cloak of Catholicism.

Both Nico and Roger in separate conversations, suggested that our next instrument for the project should be the “erhu” – an ancient Chinese two string instrument which may have originated in Central Asia – because of its ability, like the Kol Nidre, to touch the human heart.

Roger suggested I approach Patty Chan, one of Roger’s colleagues on York University’s music faculty, who had studied under George Gao, a world-renowned erhu musician, and was known as an accomplished musician/composer/teacher with the ability to use the erhu to convey the powerful emotions she experienced in her life.

SPEAKING THROUGH THE ERHU: PATTY’S MEDIUM FOR TRUTH & RECONCILIATION

Patty, who had never heard of the Kol Nidre before my approach, read a great deal, listened to many of the recordings, and became captivated by the music, which she found “very inspiring” to the point that “every day I went to sleep thinking of it, in my dreams I was thinking about it, when I woke up it was there.”

But Patty understood that as part of the Kol Nidre Project, the Kol Nidre was the starting point, while the rest of the composition were the musical roads it made her travel in her mind.

Patty explains that the erhu was a natural instrument for a Kol Nidre-based composition because,

It’s a very intense emotional instrument for me. It can express a lot of sadness, a lot of very strong emotions such as anger and frustration, and I use it to express those emotions myself.” “I found that it’s very similar to the human voice as well,” she adds. “That’s why I thought it would match well with the Kol Nidre.

Patty also explains that because the erhu was an instrument which had neither frets or fingerboard (her fingers never touch the wood) she was able to use pressure on the strings to make “ a very intense vibrato.”

Quite early in the composing stage she decided that it would be “very interesting” to work the viola da gamba into the piece because its lower register and contrasting sounds would supplant the erhu’s inability to play more than one note at a time.

When I first spoke to Patty, I was unaware that she had a very personal reason for wanting to compose a version of the Kol Nidre – a powerful drive to correct the mistakes of history – such as the Holocaust that the Chinese people experienced at the merciless hands of the Japanese during the Second World War – through forgiveness and reconciliation.

Patty had performed the music for “Red Snow,” by Toronto playwright Diana Tso, which was inspired by the 1937 rape of Nanking, and is currently working with Tso on a new play called “Comfort” which is inspired by the ordeals of “comfort women,” forced to submit to sexual slavery by the Japanese military in Asia – and inspired by the resilience of the women at war.

“The themes of peace, forgiveness and reconciliation are very important,” says Patty. “They are common values which must be shared with all other cultures.” 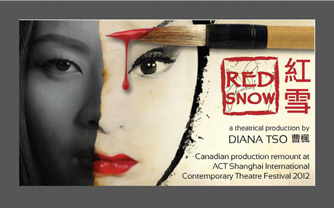 Double bass musician Marjolaine Fournier says she was delighted to be asked by Chan to accompany her because she, along with many other string players, had been inspired by the Bruch Kol Nidre for Cello. “So the melody is a little bit familiar”, she says. “You have to understand a little bit to play it. In itself, by itself, it’s beautiful.”

The difference between Patty and I, for music, is that Patty plays her heart in the music. When she is sad, oh my, it’s just going to come out, she adds. She doesn’t look for the sadness in the music. It’s her sadness that comes out in the music. That lends itself. Me, it’s the other way around. If the music is sad then I become sad.

Being connected with Chan’s Kol Nidre has also had a very personal impact on Fournier who says that sometimes she has had a hard time believing in God. “But I find that when the music is right, then it’s unavoidable.”

“These pieces that are written to reach up to God, (to) make God live,” she adds. “The purity of the intention – and there’s nothing more pure than asking for forgiveness for vows broken – is universal.”

THE CHURCH OF THE BON VIVANT 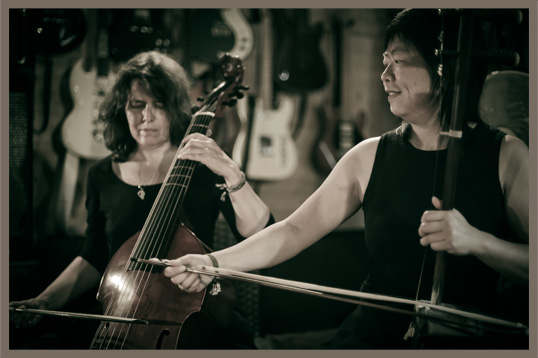 “Redemption” was recorded in “The Church of the Bon Vivant,” Nico’s sound studio in Toronto, where the walls are covered with guitars, sitars and an array of other string instruments. Although two days had been put aside for recording, Chan was surprised to be finished in three hours, after composing the piece in about thirty days.

“It was a very good experience,” says Patty. “Nico just asked us to play from beginning to end without stopping, so that we wouldn’t lose the flow. We had three takes. In the end we decided on the third take.”

Nico, who composed, performed and recorded the first Kol Nidre for the Project, and recorded the following two versions, says he was “blown away” by Patty Chan’s creation, and by the “incredible” rapport between the two musicians and their instruments.

“It is magnificent,” he said in his distinctive French accent. “And who will be next?”