Nicolas Jolliet’s interpretation of the Kol Nidre using the Sitar grew from major influences such as Pink Floyd, the Beatles (in the 60’s), Led Zeppelin and Deep Purple. They all occasionally used Indian and Arab scales and Oriental colours in their music.

A graduate of L’Ecole des Technologies Musical de Geneve, Jolliet says the Sitar exposed him to “another way of thinking,” because of scales and micro-tones which are rarely found in Western music. The extensive pitch bend techniques used on the Sitar made it very attractive to a guitar player”, he says. “On the Sitar you can bend up to six tones while the guitar is limited to a maximum of three semi-tones.” After purchasing his Sitar in Calcutta from a master Sitar maker, Nico returned to Toronto to study with John Campana. Campana helped him make the transition from Western guitar player to Sitar. Campana’s willingness to share his extensive collection of rare recordings, texts and pictures of early masters inspired Jolliet to establish a website aimed at Western guitarists such as himself who want to learn more about the world of the Sitar.

JOLLIET KOL NIDRE“TURNS UP” IN KABUL

After composing the Jolliet Kol Nidre in 2008, Nicolas received an email from Paul Wharton, a retired colonel who was acting as a consultant to a senior Afghani official at a US military base in Kabul. Col. Wharton explained to Nico that he had been extremely moved after hearing portions of his Kol Nidre over the Internet – and asked if Nico could make it possible for him to play the music at the forthcoming Kol Nidre service on the base in Kabul. Colonel Wharton later wrote that Nico’s Kol Nidre had been greatly appreciated by the troops, and thanked him profusely. I later persuaded the Canadian Broadcasting Corporation (CBC) to co-produce a documentary called “Kol Nidre in Kabul” which was broadcast nationally on a popular documentary show called “Outfront” on April 15, 2009.

How did an unusual setting of the ancient Jewish prayer “Kol Nidre” get heard by soldiers in the war zone of Afghanistan?

Ask Toronto’s Harold Levy, his son-in-law-Nick, and a retired American army officer currently on special assignment in Kabul. My CBC co-producer Steve Wadhams – a celebrated documentarian and “storyteller” – brought a unique perspective to the project: Steve, a non-Jew, sang in the choir of the Holy Blossom Temple, in Toronto, and on several Yom Kippur’s had accompanied the Cantor during the Kol Nidre recitation. He not only knew the Kol Nidre – he had experienced it. Through this documentary, the Jolliet Kol Nidre also turned up as a finalist in radio competitions in Croatia and New York. 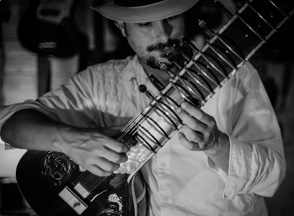